How can we help you today?

How do I operate my SERIES-B Tilt?

FOLLOW THESE STEPS to set up your SERIES-B Tilt 50W box mod, don’t miss a step!

2. Insert a charged 20Amp IMR 18650 battery (sold separately), positive side pointing up towards the top of the device (see battery requirements for more information).

4. If charging is required, connect the Micro USB charging lead. Do not force the connector, only insert it far enough for the charge symbol to appear on the LED screen.

5. The SERIES-B Tilt 50W will power up automatically when a charged battery is inserted.

6. Attach a compatible 510 tank to the device, and push the power button once to check the resistance(Ω). Current voltage/wattage and resistance are displayed on the LED screen. If the screen shows ‘TANK SHORT’ or ‘NO TANK’, check that the fitted coil is rated at 0.2Ω or above.

7. If the voltage/wattage and resistance are displayed on the LED screen, the device is ready to use. Voltage/wattage can be easily adjusted by using the + and – navigation buttons. 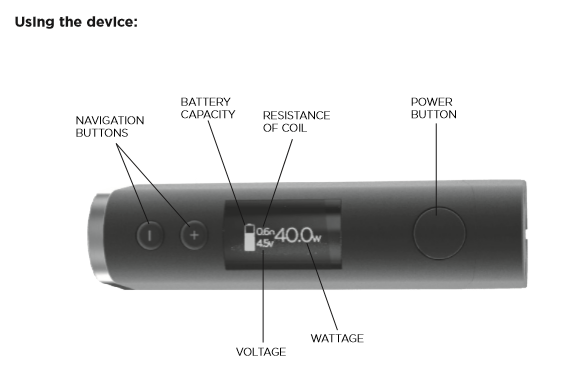 Rapidly click the power button 5 times within 2 seconds to turn the SERIES-B Tilt 50W on or off. While switched off, the device will not respond to input or fire the attached atomiser.

To switch between power modes, rapidly click the power button 3 times (while the device is switched on).

The device is fitted with a spring-loaded positive pin. The pin will compress when a tank is attached, ensuring a secure connection between tank and device.

When the SERIES-B Tilt 50W is powered on but not used for more than 10 seconds, the device will enter standby mode and the LED screen will switch itself off. Press any button to leave standby mode.

The display can be flipped easily to enable the best reading orientation. To flip, switch off the device (by clicking the power button 5 times), then press and hold the + and – navigation buttons together for 3 seconds. The display on the LED screen will then flip 180 degrees.

While the device is firing an attached atomiser, the display will begin counting up in seconds, to a maximum of 15secs. Once the power button is released, the timer will continue to display for a further 3 seconds, or push the power button once more to return to the main screen.

The SERIES-B Tilt 50W is compatible with sub-ohm coils/atomisers. The device can fire coils rated as low as 0.2Ω, though you may notice that this will drain the battery far more quickly. Using a sub-ohm atomiser will also cause the battery’s performance to reduce much more quickly when it’s near the end of its remaining charge. Sub-ohm vaping requires a suitable, high-quality 20Amp IMR 18650 battery.

Did you find it helpful? Yes No

Send feedback
Sorry we couldn't be helpful. Help us improve this article with your feedback.